Teaching an Imperfect Past: Higher Education

Click on the names of NEH scholars to read about how they are taking lessons learned at the Georgia Historical Society’s 2017 NEH Summer Institute and applying them to their work at universities across the nation. Several of the scholars have generously shared assignments, syllabi, and other resources for download.

One of the main projects I recently completed that was influenced by my participation in our NEH Institute was a historical markers project in Cedar Rapids, Iowa. We completed and installed round one of these markers in September; my involvement and things I learned at the institute, along with partnerships I forged in my community, ultimately made this a project that included a significant degree of African American history. I also used drew on specific things from the Institute, such as the marker dedication ceremony we attended as a group, when helping to plan our dedication/unveiling. I’m including here a few links that offer some details about our marker project, the dedication ceremony, etc.

Below are a few pictures of some of my favorite markers as well as a picture of the marker dedication in September. I’ll also be giving a poster on this project and on public markers/monuments/commemoration at the National Council on Public History’s Annual Meeting in April 2018. I’ve also incorporated specific documents, readings, assignment and activity ideas from the workshop into several of my classes, this term and also next. 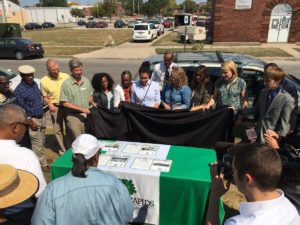 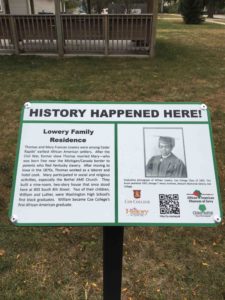 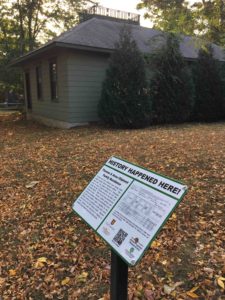 Since the NEH Summer Institute, I have employed the lessons learned in the following ways:

I created a new unit on the Georgia Historic Marker Program for my Introduction to Public History course in the fall of 2017.

I have been accepted to give a presentation on the Georgia Historic Marker Program at the 2018 Georgia Association of Historians Annual Meeting.

I am working on a peer-reviewed article for publication in The Public Historian on the Georgia Historic Marker Program.

In spring 2018, I am teaching what is for me a new course, History and Memory, which will focus on Southern history and memory. The class is largely inspired by my experience at the Summer Institute. For their final project, students will document the history of the monuments on the State Capitol Grounds. We will produce a brochure that provides context for the monuments, and I am hoping that we will be able to convince the governor’s office to distribute the brochure at the Capitol.

I am currently teaching the course that I developed as part of GHS’s NEH seminar, entitled “Monuments, Artist Interventions, and the Struggle for Memory in the Americas,” at The Cooper Union in New York City. Our classroom discussions have explored the deep history of the Confederate monuments that were at the center of recent violence, and have also considered other artistic and community responses to controversial histories across the U.S. and Latin America. These examples gave the class, which is composed entirely of art students, the tools necessary to reinvision a local public space as part of their final course project. The course description and syllabus is provided below.

I also moderated a public panel at The Cooper Union that brought together historians, artists, and architects to discuss what should be done with Confederate monuments. The panel attracted over 400 students and community members. Watch the video on YouTube.

Monuments, Artist Interventions & The Struggle for Memory in the Americas. Faculty of Humanities and Social Sciences, The Cooper Union. Instructor: Mya Dosch

On August 12, white supremacist and Neo-Nazi groups converged on Charlottesville, Virginia to protest the city’s planned removal of a Robert E. Lee statue. In the aftermath of the violence in Charlottesville, citizens in Durham, North Carolina took matters into their own hands, felling a Confederate soldier monument. This course considers the contentious debates involved in erecting and removing such artworks. We will ask: What visual strategies have artists used to commemorate controversial histories in the 20th-century Americas? How have subsequent generations questioned, reimagined, and subverted these strategies? The course centers on debates over racial justice and monuments to the US Civil War and slavery, but will also consider memorials to other violent histories across the Americas. Students will gain an understanding of public sculpture since the late 19th century, while also exploring embodied and ephemeral practices such as parades, reenactments, performance, and graffiti.

Based on the excellent NEH Institute you designed, I rewrote my American Studies 202 Workshop in Cultural Analysis and I designed a Salon for the Clarke Forum for Contemporary Issues (which I direct), on the Confederate Monuments controversies. Below are the syllabus, the assignment for the second unit which focused on memorials, and the invitation for the Salon.

The lesson materials provided below were created by Dr. Karen Hoppes for her two-year United States History course at Portland State University. In the lesson, students are asked to design a monument to industralization based on what they learned in a previous unit on the Industrial Revolution. Please note, these resources may include copyrighted materials and should only be used in a classroom setting under Fair Use guidelines.

I wanted to share a few updates since the summer. First, I recently returned from a conference in Johannesburg titled “Troubling Histories: Public Art and Prejudice.” While there I gave a paper, “Tarred by History: Materiality, Memory, & Protest,” which considers the use of tar on Richmond’s J.E.B. Stuart monument as a material of resistance. I’m currently revising the essay for journal submission.

Additionally, I have been working on my book project, but that, too, is in progress. Both projects have been deeply informed by the readings, trips, and conversations of this summer’s institute.

Below is a copy of the syllabus I used for my course this semester on “Lynching in Political and Literary Memory.” I’m also including two links. The first is to something I wrote on Emmett Till’s funeral for the Oxford University Press Blog this September. The second is a link to a campus-wide event three of my students hosted in conjunction with the course on lynching. More than 120 students showed up for a screening of the new thirty-minute film AN OUTRAGE: A DOCUMENTARY FILM ABOUT LYNCHING IN THE AMERICAN SOUTH. Students followed the film with a successful 30 minute Q&A. I include the link because the film may be of interest and use to teachers.

An Outrage: A Documentary Film about Lynching in the American South.

As a result of the GHS’s 2017 Summer Institute, I have created a new syllabus for my course Slavery in the Contemporary Imagination, a first-year seminar at the University of Richmond. In addition, I will be presenting on research begun as a result of the institute at the Carolina Lowcountry and Atlantic World (CLAW) conference in March 2018. The paper I will present there is entitled “Whose Freedom? Whose Memory?: Shaping a Transnational Public Memorial Landscape in the Atlantic World.”

The intellectual focus of the NEH Summer Institute, the camaraderie of the participants, and the library resources of the Georgia Historical Society all paid dividends in my written work. It was—has been—a time of protest and high emotions over public memorialization as well as a parallel energy in the Black Lives Matter movement. I needed to place one book review (which appeared in late 2017 in the American Book Review) in the context of Black Lives Matter, and I needed to discuss in another review (forthcoming in Southern Studies) that official public memorialization has barely recognized Gabriel, the leader of the 1800 Richmond slave conspiracy that aimed at freedom and control of the city. I might never have thought about memorialization had I not been in the Institute with so many aware people, and, because we did this in the Institute, I found the marker for Gabriel’s rebellion, about twenty-five miles north of Richmond. Then the GHS provided me with sources for two original works. One is an analysis of sermon notes originating in a black Baptist congregation that left Savannah for one of the Sea Islands in the nineteenth century. It appeared as “‘All Is for the Wind'” in the Journal of Southern Religion (2017). The other is a transcription of that congregation’s 1843 church covenant. It should appear as “A Church Shall Be Called the First African Baptist Church of Saint Catherine’s” in the Georgia Historical Quarterly in the next year or so. I will always remember working in the GHS reading room during our free hours with other Institute participants. Thanks to them and the leaders and the staff.